Motion Along a Straight Line

The world, and everything in it, moves. Even things that seem stationary, such as a roadway, move with Earth’s rotation. The Earth orbits around the Sun. The Sun orbits around the center of the Milky Way, and the galaxy moves relative to other galaxies.

This post explores the elements needed to understand motion along a straight line.

We’ll start with basic concepts such as position, displacement, and average velocity. Eventually we’ll speed up and explore the definition of acceleration, and from there, a whole new way to understand rectilinear motion will unveil.

If you’ve been studying this topic in physics and struggle to understand the concepts, I invite you to explore this page and see what I have to share, since I’ve made this not only user-friendly, but engaging and inviting too.

In order to understand motion, we have to first understand no-motion. Life has it this way and I love it. It takes you to different places to get where you wanted to be in the first place.

What I just said may sound nonsense for some, and perhaps profound for others. All I’m trying to do is give you some perspective to approach this concept, the concept of position.

Position is the equivalent to frames in animations. Animations seem to move, to have motion, yet they are just a sequence of frames moving a certain speed to create the illusion of motion. Each frame represents a still image of the animated object. This still image is needed to perceive the effect of motion in the animation, and without it, the animation could not be understood.

In order to see an object moving, we need to know where is moving. We need to give it a reference, so that when we see the object move, it is easy to say it moved from here to there.

In short, the position of a moving object, is like a frame of an animation, because both help build the concept of motion.

Since this motion is along a straight line, we give that straight line a name: axis. An axis is just that, a straight line we arbitrarily picked to helps us describe the motion of the object we want to study. The axis is sliced in segments of equal distance one of each other, that will serve as reference to tell the position along the axis of the moving object.

To better understand the concept of an axis, think of a football field with the marks of yards. Now, take a very thin section of it, still with the yard marks. This would be a perfect example of what an axis is.

For simplicity, we often use the horizontal axis and describe the motion on its positive direction, that is, from left to right. We’ll talk more about positive and negative directions later on the post.

Also, the horizontal axis is called, “x” axis, and from now on we’ll be using it a lot!

Displacement is the concept that describes motion itself. Going back to our frames example, a series of frames would describe displacement or motion.

We talk about the displacement of an object when we observe a difference in position. That is, when you say a thing was here and then was there, that thing has displaced. And going back to the x axis, when an object has initial and final positions, we can determine the displacement of this object by comparing both positions along the x axis and telling the difference between both positions.

It is important to say that the axis letter could be also “y” or “z”. In most cases, “x” is used for simplicity, but ∆x, ∆y, or ∆z are commonly seen in when studying physics.

Just like everything man uses to describe the world around him, the concept of average velocity is also arbitrary. Yet this does not mean is not useful or incorrect. In fact, it is very useful and helps to describe, analyze, predict, and plan the motion of an object.

If you take the velocities along the different positions of an object, you’ll know its average velocity.

If you divide the displacement of an object by the time it took the object to make that displacement, you’ll find average velocity as well.

Later when we see the concept of acceleration, we’ll have to talk about the signs again.

Also, you must know that both displacement and velocity, are vector quantities, which means they have direction and magnitude. We’ll talk about vectors on a different post, but for now, that is enough.

Imagine you drive an RC truck along a straight road for 0.7 km at 20 km/h. Here, your truck runs out of battery and stops. Over the next 30 min, you walk 2.0 km farther along the road to a hobby store.

The instantaneous velocity is nothing more than the velocity at given instant. A given instant is a fraction of time close to (but not) 0 (zero).

When a particle’s velocity changes, we say the particle accelerates (or experiments acceleration). For motion along an axis, the average acceleration aavg over a time interval ∆t is

It is fairly common that in many types of motion, that acceleration is either constant or approximately so. For instance, you might accelerate a car at an approximately constant rate when a traffic light turns from red to green.

Then, the graphs of your position, velocity, and acceleration would resemble those below.

Note that a(t) is constant, which requires v(t) to have a constant slope. Later when you brake the car to a stop, the acceleration (or deceleration in common language) might also be approximately constant.

Such cases are so common that a special set of equations has been derived for dealing with them. One approach to the derivation of these equations is given in this section. A second approach is given in the next section.

Throughout both sections and later when you work on the homework problems, keep in mind that these equations are valid only for constant acceleration (or situations in which you can approximate the acceleration as being constant).

Second Basic Equation. Just like we did before, we can get the average velocity equation and rewrite it like this: 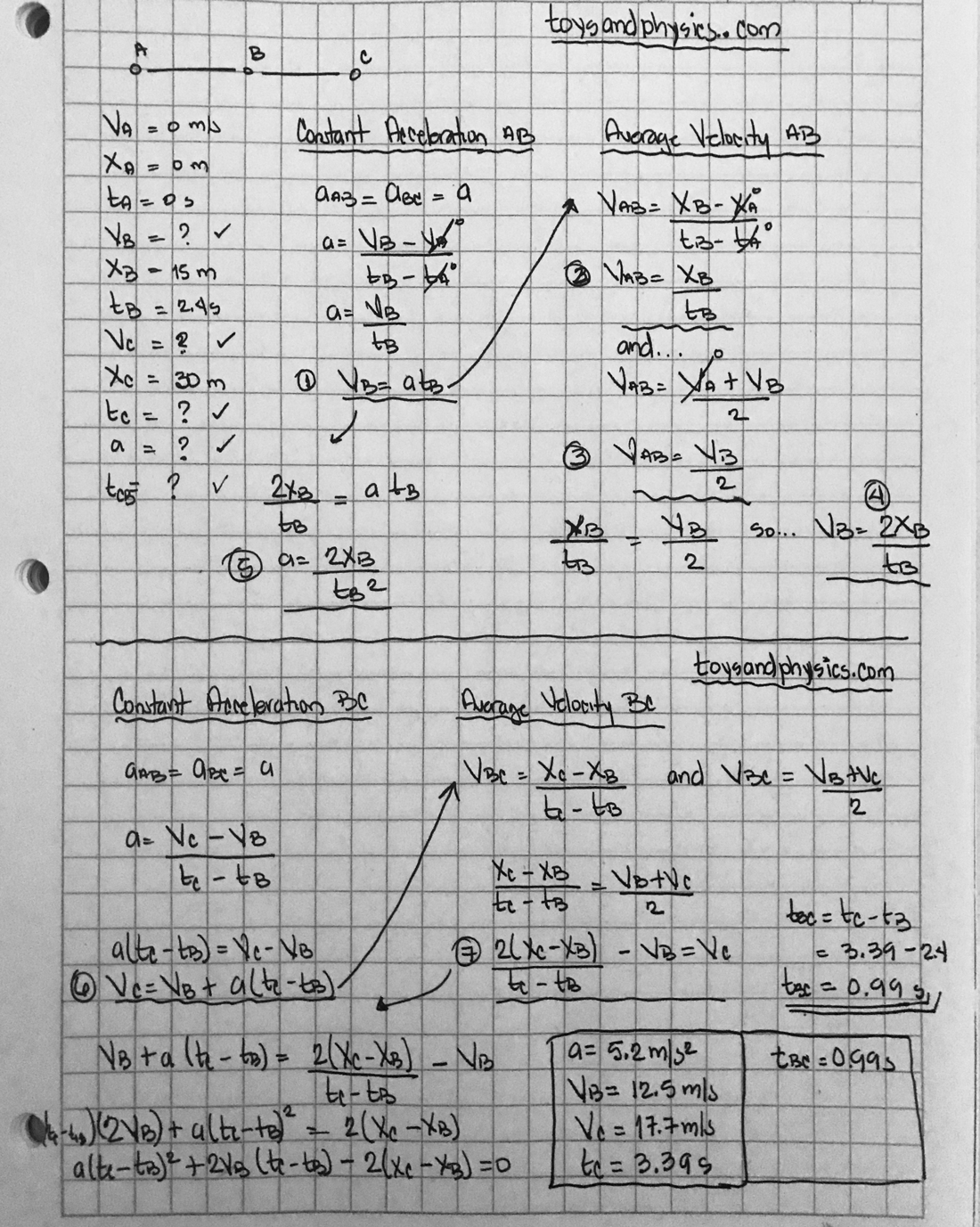 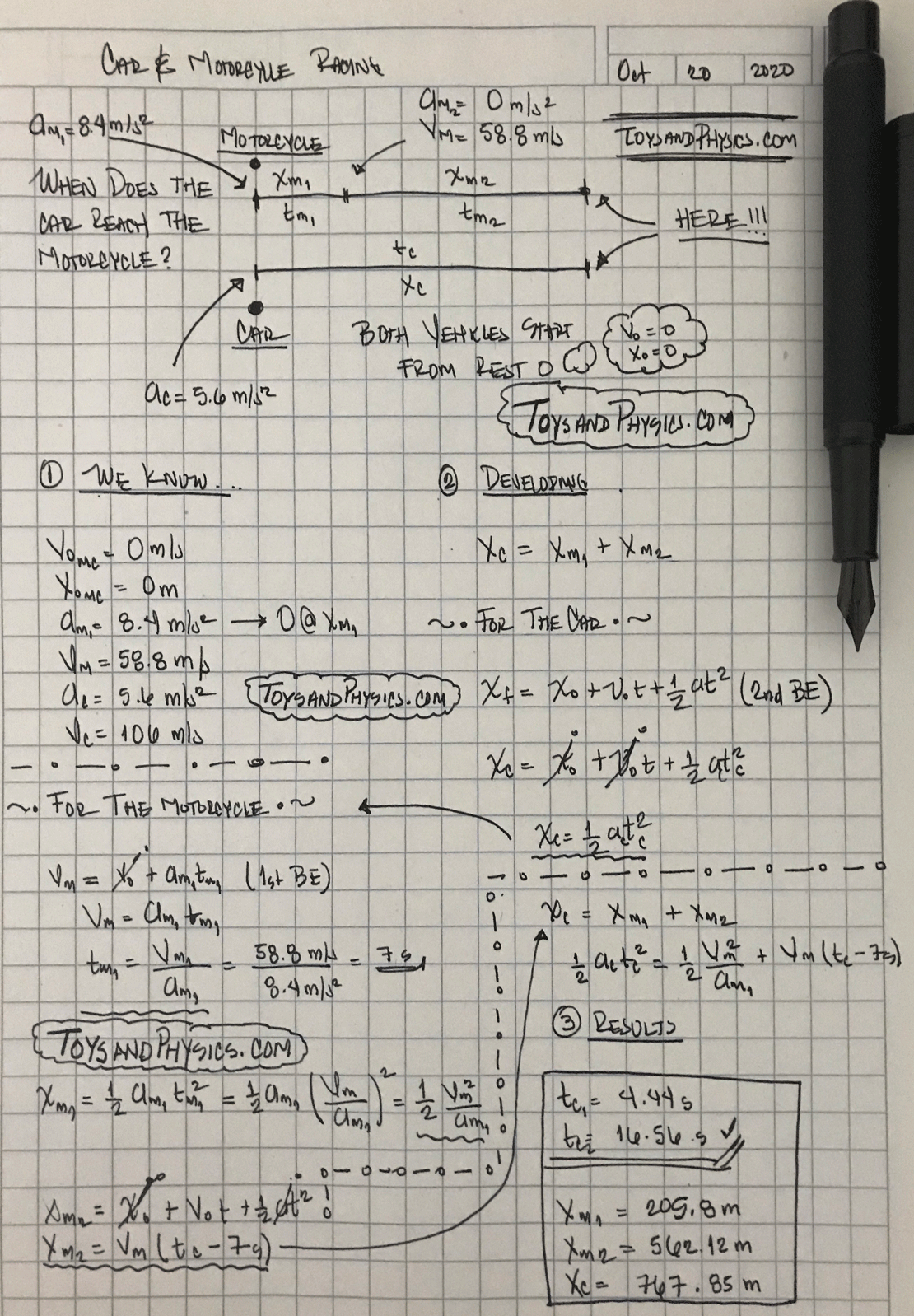 It was Galileo Galilei who questioned the widely accepted idea that if two objects fell from the same height and at the same time, the heavier one would reach the floor sooner. This happened in the 16th century, and he even conducted several experiments to show the first idea was wrong.

In the 4th century B.C., Aristotle theorized the first idea, and believe it or not, it was the standard for almost 2000 years. If you ask me, this proves that we could be wrong in many things we have believed to be true in the last 2000 years as well.

This portion of the post deals with free-fall acceleration. And one of the central ideas to keep in mind is what Galileo discovered while conducting his experiments:

Here is a short animation with the basic idea.

In the everyday world, you can’t replicate this experiment with a feather. And this is because we live in a world filled with air. There is no vacuum like in the previous example. But, if you make the experiment with an object that is heavier than a feather, say a bowling ball and a football, chances are you’ll be able to see Galileo’s prediction.

In fact, the equations of rectilinear motion apply the same way for vertically or horizontally moving objects, and the only thing that changes is the value of the acceleration.

In this case, a = g, which is the value of gravitational acceleration for planet Earth close to its surface.

Again, the equations of motion along a straight line continue to work if the object is falling down or falling up, that is, if the vertical motion is down or up.

We use cookies on our website to give you the most relevant experience by remembering your preferences and repeat visits. By clicking “Accept All”, you consent to the use of ALL the cookies. However, you may visit "Cookie Settings" to provide a controlled consent.
Cookie SettingsAccept All
Manage consent

This website uses cookies to improve your experience while you navigate through the website. Out of these, the cookies that are categorized as necessary are stored on your browser as they are essential for the working of basic functionalities of the website. We also use third-party cookies that help us analyze and understand how you use this website. These cookies will be stored in your browser only with your consent. You also have the option to opt-out of these cookies. But opting out of some of these cookies may affect your browsing experience.
Necessary Always Enabled
Necessary cookies are absolutely essential for the website to function properly. These cookies ensure basic functionalities and security features of the website, anonymously.
Functional
Functional cookies help to perform certain functionalities like sharing the content of the website on social media platforms, collect feedbacks, and other third-party features.
Performance
Performance cookies are used to understand and analyze the key performance indexes of the website which helps in delivering a better user experience for the visitors.
Analytics
Analytical cookies are used to understand how visitors interact with the website. These cookies help provide information on metrics the number of visitors, bounce rate, traffic source, etc.
Advertisement
Advertisement cookies are used to provide visitors with relevant ads and marketing campaigns. These cookies track visitors across websites and collect information to provide customized ads.
Others
Other uncategorized cookies are those that are being analyzed and have not been classified into a category as yet.
SAVE & ACCEPT